Russia’s largest integrated solar energy company, Hevel Group, will help Kazakhstan launch a new solar plant in the Caspian country’s southern region of Turkistan sometime next year. The $50 million plant with the capacity of 50 megawatts (MW) will cover approximately 500 acres of land near the village of Kotyrbulak. 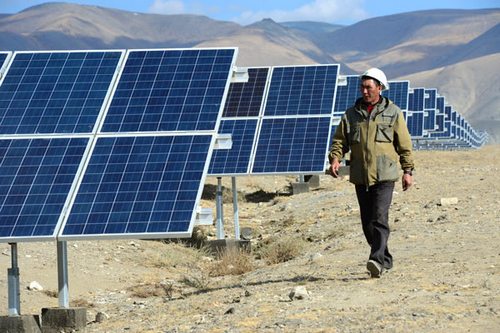 “After the completion of the solar power plant, the cost of green energy should be competitive and beneficial to the residents,” the regional municipality’s website cited Mayor Zhanseit Tuimebaev as saying on February 2.

Hevel Group was awarded 15-year power purchase agreements for the sale of power from 70 MW solar plants, both to be located in southern Kazakhstan. The company, launched in 2009, manufactures solar modules and constructs and operates solar power plants.

“This tender was a high competitive one and our victory means that we have entered an international market not only as PV (photovoltaic) modules supplier, but also as a power company competing with major international players, said Igor Shakhray, the CEO of Hevel Group, according to company’s website.

Kazakhstan’s population is over 18.5 million – high for Central Asia, but globally low. Under the Kyoto Protocol, which went into effect in 2009, Kazakhstan vowed to reduce its carbon emissions by 15 percent by 2020 and up to 30 percent by 2050. The country committed to switching to a ‘green’ economy, despite its vast fossil fuel reserves, and is determined to generate three percent of its electricity from renewables by 2020; 10 percent by 2030; and at least half by mid-century.

Hevel Group’s CEO believes that because Kazakhstan is aiming to generate at least half of its electricity from renewables, investors can be confident that the market demand there will not decrease.

“In the south of Kazakhstan, solar insolation is about 1,800 kWh [1.8 MW] per one square meter per year, which guarantees high output,” Shakhray told Russia’s Kommersant in an interview last year.

According to the European Bank for Reconstruction and Development, Kazakhstan’s solar power potential is estimated to be 3.9 million to 5.4 million MWh, or around five percent of annual power consumption. There is high solar irradiance in most regions of the country, but because Kazakhstan is located in the northern hemisphere the general trend is to develop solar resources in the southern parts of the country.

Kazakhstan has been striving to create a favorable climate for foreign investors and to strengthen its economy at the same time. The country’s laws allow for state grants to entrepreneurs, who are exempted from paying land and property taxes for up to five years from the date of signing a contract. They are also fully or partially exempted from customs duties on imports of equipment and materials for their projects.