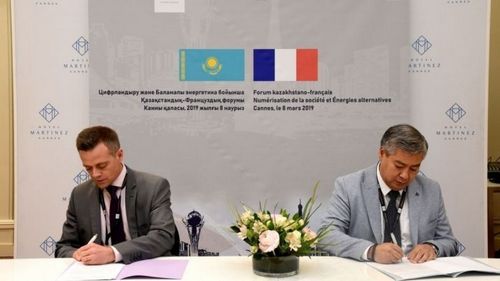 The state delegation of the Association took part in the Kazakh-French forum on digitalization and alternative energy, organized by the Embassy of Kazakhstan in France, Kazakh Invest JSC, the Honorary Consulate of the Republic of Kazakhstan in southern France and the French entrepreneurs Association MEDEF International.

The Kazakh delegation led by the Vice-Minister of Digital Development, defense and aerospace industry of Kazakhstan Daryn Tuyakov consisted of representatives of government departments, national companies and the industry’s businessmen. The Kazakhstan Solar Power Association showcased to the French professional audience successful experience in the construction and commissioning of solar power plants, one of which is BURNOE SOLAR. Nursultan Nazarbayev, President of Kazakhstan, launched this power plant in December 2018, and the prestigious global financial publication EMEA Finance recognized this investment project as “The Best Transaction in Eastern Europe in the Field of Solar Power- 2018.

Kazakhstan experts showcased the country’s investment opportunities, the system of state support and stimulation of the development of digital technologies and alternative energy industry.

"Upon completion of the forum, a Memorandum of Mutual Cooperation was signed between the Kazakhstan Solar Power Association and one of the ten best European electric power companies operating in the green economy, Urbosolar SAS. Nurlan Kapenov, head of the Kazakh Association, and vice president of the French company, expressed confidence that the forum and the signed agreement will be the next stage of fruitful bilateral economic cooperation and exchange of advanced technologies in the field of alternative energy," the message says.